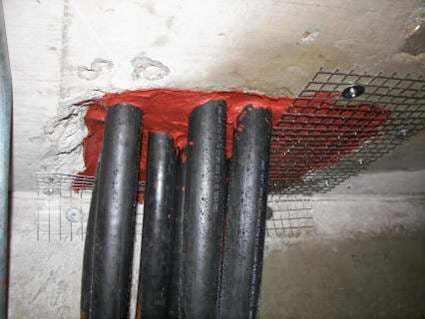 A firestop is a passive fire-protection method designed to diminish the opportunity for fire to spread through unprotected openings in a rated firewall. Such openings are found around the perimeter of pipes and wiring that penetrate firewalls.

Places where firestops are required:

Firestops must seal all unprotected openings in firewalls. In homes, firewalls are found in the following locations:

Common Problems With Firestops
InterNACHI inspectors should call out any instances where firestops are missing, damaged, or otherwise inadequate. Brief explanations of firestop deficiencies commonly encountered by inspectors are listed below:
Common Firestop Materials
In summary, firestops are designed to prevent the spread of fire through unprotected openings in rated firewalls. Inspectors should understand what they are and what purpose they serve.