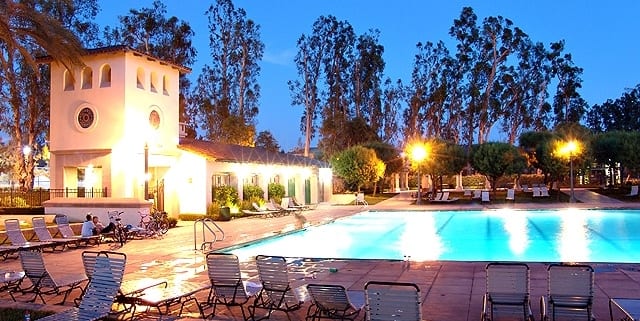 The Rancho Santa Margarita Landscape and Recreation Corporation, or SAMLARC, is known as the master association in Rancho Santa Margarita because its membership has other smaller sub associations in it and it includes the original design of the master planned community of Ranch Santa Margarita.  SAMLARC has about 13,000 units and oversees the maintenance of almost all the medians, streetscapes, trails and parks.  They have 13 parks, 4 pools, a lagoon, a lake and several trails in the community that they run and meticulously care for.  Central Park is one of SAMLARC’s wildly popular parks that’s located next to City Hall, it has a huge amphitheater where many of the communities events a held annually. Central Park also has a soccer arena rink that used to be a roller hockey rink, which SAMLARC maintains along with a very popular dog and skate park that are located in SAMLARC’s Canada Vista Park.  Many of the residence of Ranch Santa Margarita enjoy a healthy, active lifestyle primarily due to all the fabulous outdoor activities the city has to offer.  Some of these fantastic activities include running, biking or hiking through the beautiful wide variety of trails in the area as well as Tijeras Creek Golf Course and Lake Rancho Santa Margarita all with amazing views.

Signature Home Inspection specializes in Orange County Home Inspections and is most familiar with the streets, neighborhoods, and homes for sale in Rancho Santa Margarita, California.